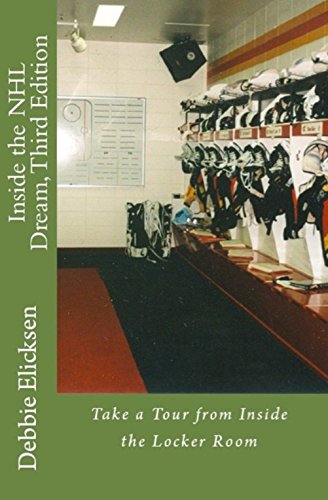 Inside the NHL Dream: Take a Tour from Inside the Locker Room (English Edition) por Debbie Elicksen

Debbie Elicksen con Inside the NHL Dream: Take a Tour from Inside the Locker Room (English Edition)

While most of the players and other personnel in this book may have retired or moved into other positions, the book still gives you a realistic peek at what life looks like behind the scenes of the National Hockey League. It goes deep into areas other books have never gone.

What happens in the general manager's office right before he makes a trade? Who takes care of a player's household after he reports to his new team? What does an agent do?

Power skating instructor Audrey Bakewell wrote the Foreword. She has worked with the Edmonton Oilers and many of the players in yesterday's and today's NHL have passed through her school.

Inside the NHL Dream puts a human face on those who work inside the league. Here are some highlights:

Dwayne Roloson: "I felt that I had a really strong training camp in my first year. Calgary had Trevor Kidd and that was about it. When they sent me down, I was really frustrated. We had just come back from a road trip and bang! You’re in an airport with a ticket to Saint John. It’s like something blew up inside you. You’re walking on something and it just drops out from underneath you. It was a big disappointment but it’s part of hockey. You have to do whatever you have to do to get back up."

Perry Berezan: When that last year in San Jose was over, I tried to call general managers directly to ask them what they thought. As I spoke to them, I thought, I don’t want to do this anymore. My next call was to the University of North Dakota to go back to school."

Cory Stillman: "We just purchased a house in Calgary. When it came to the point where we had a house in mind, we asked if we should buy it. We were told yes, you’re in our plans and then they turned around and traded me ten days later. It’s unfortunate how the situation was handled. As a player you try to respect your organization and do anything for them. I think a courtesy call, just saying, Cory, we are going to trade you, goes a long way. Unfortunately, I found out on TSN. I’ve heard the same thing has happened with other players."

Kelly Hrudey on the public relations job: "Players may not want to do a job like that because they know about the travel and how grinding and grueling it is. It’s one of the things I hated at the end. I hated the travel and checking into a hotel at three or four in the morning. Everybody knows the PR guy’s job is very tough."

Brent Breeze, agent: "A player that we didn’t act for came to us to have us represent him but there was nothing that we could do. We helped him with what we could. He was receiving a lot of pressure from his family about the NHL draft and asked us if it was a good idea for them to attend the draft. We simply said no, it would not be a good idea. Go golfing and get it out of your mind. The player went to the draft by himself. His parents bought him a ticket and forced him to go. The player was not selected in 11 or 12 rounds. The draft is a good fourteen, fifteen hours. He was waiting to hear his name, thinking it was going to be called because it’s what his parents told him. He didn’t get drafted. Three days after the draft we received a phone call from his family. They asked if we had seen their son. 'Our truck and our shotgun are missing and we don’t know where our son is.' The police and everybody were looking for him. He finally came home. He took the shotgun and the truck because he obviously wanted to commit suicide. He felt like he was a failure because he didn’t live up to his parent’s expectations. He was terrified to go home. This is only two of hundreds of scenarios that happen every year."